I recently walked out of court with a client after a trial. Although we had won, my client was shaking his head in self-blame, interrogating himself about why he had ever rented to this tenant. Although my client’s ordeal was largely over-we had obtained judgment against the tenant for possession and $8,000.00 in rent, costs, and attorney’s fees-the judgment was not so much a measure of victory as it was a measure of loss, a public reminder of how much my client had allowed a bad tenant to get into him, how much he was now out of pocket for subsidizing the living expense and broken promises of a liar.

Not a month goes by in my practice that I don’t hear clients utter the same phrase-sometimes in more colorful language-at least ten times: “I never should have rented to this guy. I never should have rented to this guy.” In the case mentioned above, after the tenant fell behind and my client started looking into his background, he learned from a previous landlord that the tenant had a prior eviction. At the time of our trial, the tenant was also under indictment for mortgage fraud and had a prior criminal conviction for possession of counterfeit government bonds.

My curiosity piqued, I did my own superficial background check on the tenant and found that, since 1995, this particular tenant had amassed six eviction judgments in his real name and two more under an assumed name, a total of eight evictions in just fifteen years. So how did this tenant-from-hell wind up in my client’s rental property? The need to ask the question is even more confounding when one considers that the rental was a new build, a four-bedroom house, rental price $3,200/ month, nice neighborhood, the kind of place that many qualified applicants would be happy to call home. My client didn’t need bodies. What was the reason, then, that my client’s rental property became home to The Convict and Serial Evictee?

Easy. My client didn’t screen. He didn’t verify the application nor did he run credit. Why? Because the tenant had made such a convincing appearance. He was mature, friendly, a good conversationalist, wore nice clothes, drove an expensive car, had a pretty girlfriend, and told a nice story about needing a house to start a family. The tenant also looked good on paper. He was, in short, an accomplished con man. Convinced that he had found the right man, my client skipped the verification process and signed a lease. And-when the rent started dribbling in, late, and the bad checks and broken promises outnumbered the timely payments-he soon came to regret it.

Every landlord-tenant relationship must begin with the same thing: a thorough application. Get a form application online, at Office Depot, or from your nearby landlord association. Just make sure that the application asks for the applicant’s full name, driver’s license number, social security number, and the last five years of home addresses. Most importantly, verify the information. Make the tenant show you his driver’s license and social security card. This information will also help out collection efforts later should you wind up getting a money judgment against the tenant.

The next step is to run the applicant’s credit. The reports that you order up should include a combined credit report (i.e. a compilation report from all three major credit reporting agencies), an eviction and civil records search, a criminal database search, and employment and rental verification. You may charge the tenant the actual cost of the background check not to exceed $42.00. Sometimes the tenant, rather than pay the fee, will offer up his own credit report. Don’t accept it; get one of your own.

I’m writing this article at the end of October 2010. In just this month, I have worked on seven eviction cases where the tenant had an eviction judgment within the last two years. That’s just my practice, this month, and seven cases that I know about (i.e. where I learned about the prior evictions from my clients). There may have been others. The point is that bad tenants abound and you need to protect yourself from them.

Bear in mind some characteristics that I’ve discovered about tenants with recent evictions. First, they’ve learned a little something about the system. In other words, they know how to delay. Second, they don’t fear the system. They’re not afraid of court, judges, lawyers, the sheriff. They know the time periods and they know how to plan. Also, their credit is already wrecked so they don’t fear the hits to their credit that an eviction judgment and money judgment will bring. Trust me, you don’t want these people unloading a moving truck in front of your rental.

The deadbeat tenant usually has a string of financial victims. He’s just trying to make you the next one. Whether that happens is up to you. Remember, though, that a prior landlord paid an attorney to take an eviction case through to a reportable judgment so that he could warn the world about the tenant. If you fail to screen, you are effectively nullifying that suffering and cost borne by the prior landlord. Don’t make the past irrelevant, screen. 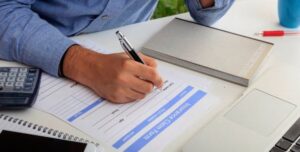 The law of deeds has its roots in the ancient rite of livery of seisin. That ceremony served as the forerunner to the modern deeding process at a time when very few persons could write. This method of transferring ownership required that the buyer and seller gather a group of local residents on the property […]

As it’s Halloween this weekend, we decided to get in the ‘spirit’ of things and bring you some real life horror stories from the world of conveyancing. Beware: The following contains content of a horrifying nature! Mr & Mrs Smith had never moved house before, so their knowledge of the conveyancing process wasn’t that great. […]